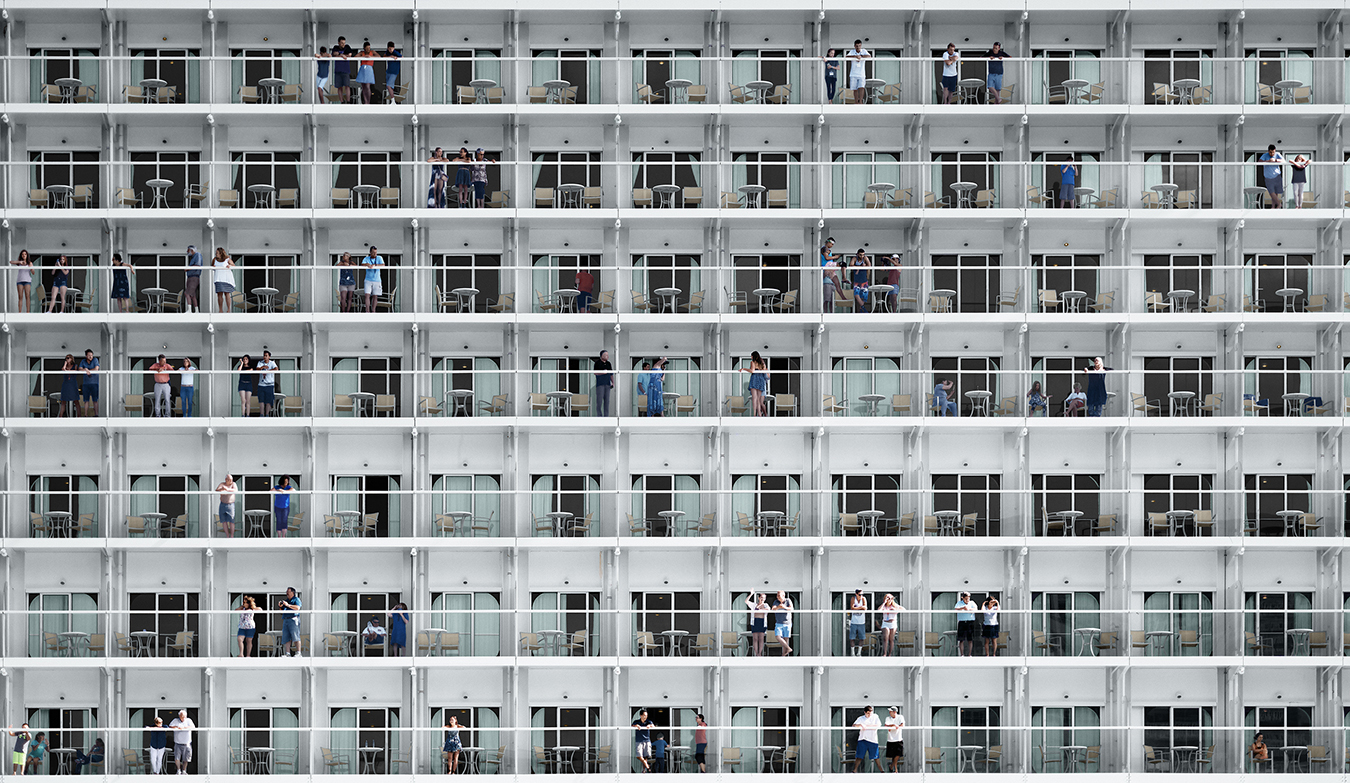 Artmedia Gallery is proud to exhibit an adapted version of “Fugitive Souls,” the latest Mitya Trotsyi's body of works, under the title of A Supposedly Fun Thing.

In this project, combining videos and photographs, the artist shows his simultaneously brief and careful, passing and attentive sight of cruise passengers at the starting point of their trip. He used a telephoto lens to capture thousands of images that describe the cruise ships immediately after leaving the boarding point of Port Everglades in Fort Lauderdale, Florida. He took front panoramic views of the grid structure, corresponding to a lateral side of this kind of floating palaces, just when from their balconies some people look at and wave the spectators of the trip at a distance. He also cropped his big views in separate full shots, each one of one balcony, to explore the corporal and facial expressions of people. According to the objective of the excursion, we are authorized to assume that the travelers were preparing themselves for a mandatory journey of joy and happiness.

Trotsky, who lives and works in Florida, has become a perspicacious observer of the complex economic, political and cultural traits of South Florida as a new developing pole in late capitalism. In this work, he avoids the graphic description of the complete travel and only focuses on the beginnings, as we mentioned before. He suspends any visual comment and allows the spectators —even himself as a producer of thought about his work— to fill the reading of the body of work displaying their reflections, feelings, sympathies or disfavors to the cruise vacation as a model of amusement, among other topics. If Trotsky’s gaze seems to be ironic, maybe it could be the result of its pretended objectivity. Consequently, in A Supposedly Fun Thing, Trotsky permits to flourish perhaps the most ambitious and sophisticated purposes of the artistic production: ambiguity and polysemy.

At the end of the 1990s, M. Trotsky abandoned a successful artistic career for a creative work as a film and TV producer, but silently kept his long personal practice of photography, initiated when he was a child. Recently, he has made his comeback to the art world with a consistent photographic work. In 2016, he presented a solo exhibition at artmedia GALLERY: Today is the Day. At this moment, he has several projects in process. In November 2017 he exhibited his body of work titled Fugitive Souls at Kunstverein on Rosa-Luxemburg-Platz, Berlin.

José Antonio Navarrete has developed an extensive international career as a curator, researcher, and critic of visual arts and culture. His lengthy bibliography focuses on topics of modern and contemporary art, with emphasis on how media technology has affected and transformed art practices. Among his most important recent publications are …Of the Americas, Lehigh University Art Galleries, Bethlehem, Pennsylvania, 2016, and the reedition of his book Fotografiando en América Latina: Ensayos de crítica histórica by Centro de Fotografía, Montevideo, Uruguay, in 2017. During this decade, he has also exhibited his artistic work.

Artmedia Gallery was founded in 2012. With a location in Wynwood Art District, Miami, Florida, the gallery has the mission to explore the vast possibilities of the expanded notion of art through media technology, with photography and video as its core interest.