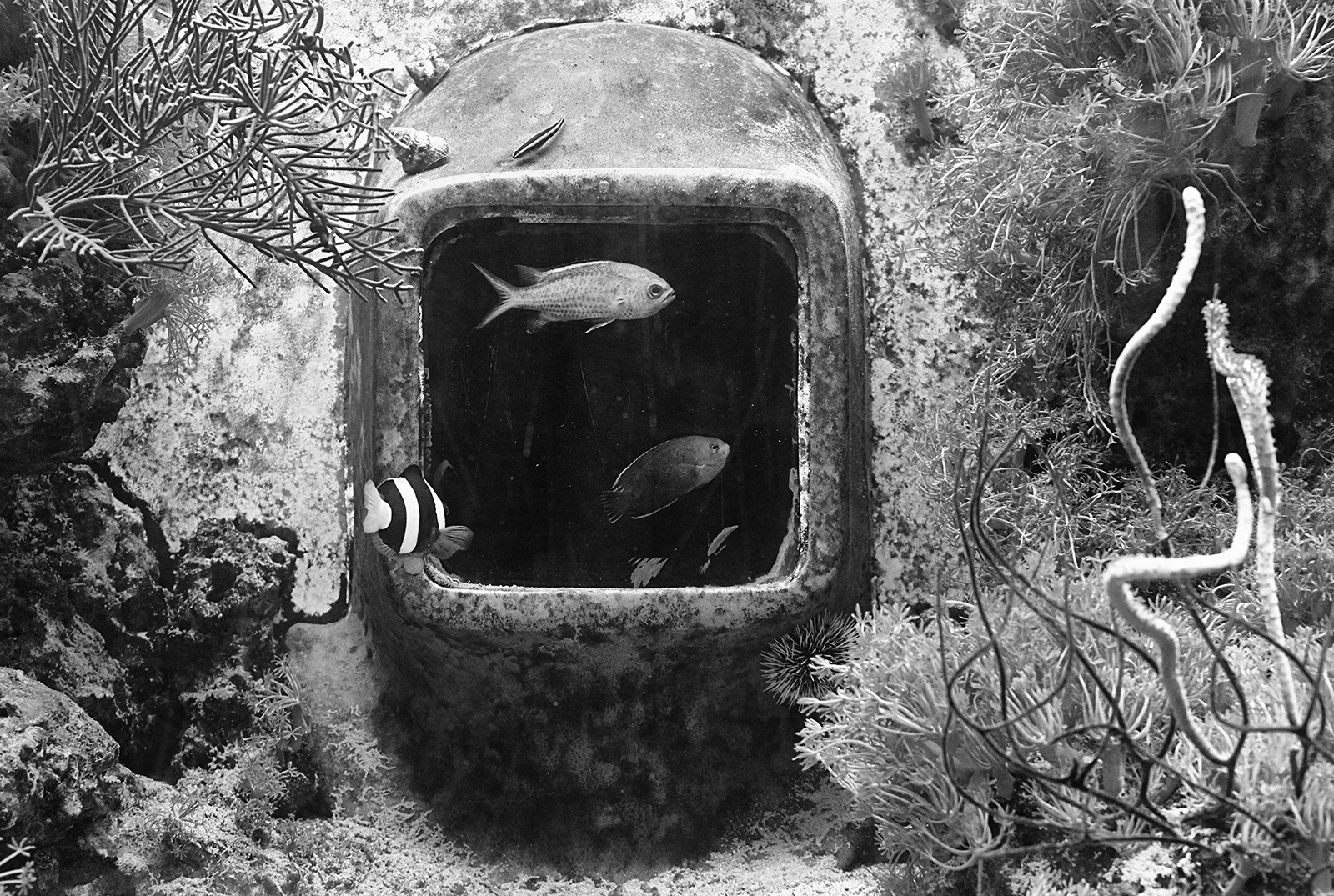 A. Lilia Smith presents “Where Memories Reside” at ArtMedia Gallery through April 29. The show gathers the photographs included in the series of the same name, produced from 2011 to 2015. These series, whose point of departure is a poem dedicated by Smith to her deceased father, is a collection of images that directly focus on found objects and land and seascapes that she made in South Florida, mostly in the Keys. In this interview, Smith shared with us details of the creative process she employed to complete this amazing body of works in which objects function as activators of memories. “Where Memories Reside,” curated by José Antonio Navarrete, emphasizes the powerful possibilities that photography possesses as a tool for overcoming reality and creating poetry.

Raisa Clavijo - How were the photos included in “Where Memories Reside” born?

A. Lilia Smith - I recall writing in my journal that the idea for this body of work began perhaps during my childhood. Since I can remember, I have had a special relationship with the sea that strongly connects me to many childhood experiences shared with my father. During the past several years, I have been photographically investigating various themes related to the passage of time, loss and transformation. I am often drawn to the beauty I find in the demise of organic life and non-organic matter. “Where Memories Reside” incorporates these themes in the form of a metaphor about memories. The work was born from a poem I wrote in my head one late spring morning while driving to the Florida Keys. It was dedicated to my father since the images were inspired by my recollections of joyous moments spent with him during my childhood.

A.L.S. - My interest in photography dates back to the late 1970s, for it was during this time that I purchased my first camera and began to develop my own photographs in the darkroom. This interest grew out my appreciation for portraiture. I found in the camera the perfect instrument for capturing the immediacy of fleeting moments and the range of forms and emotions articulated by human beings with their gestures, movements and body language. During the same time I was painting, practicing dance and studying art history. In the middle of the 1980s I took a detour away from creating art to become a psychologist. However, I did not stray too far away from the source. I maintained my connection to art through studying the psychology of creative processes. It is clear to me that my desire for making art was never quenched, for I have returned even more passionately to the practice of photography.

R.C. - How do you think your vision of the world as a photographer is influenced by your professional experience as a psychologist? To what extent does it influence the way you choose scenes, objects to be photographed or emotions you want to communicate through your photos?

A.L.S. - My professional experience as a psychologist does not influence my artistic vision of the world, for each area of investigation examines phenomena from different perspectives, leading to different questions and answers. I may inquire into various aspects of the human condition that interest me, but my intention as an artist is to express my personal point of view and to create works of art that are free from the constraints imposed by the boundaries of my clinical practice. However, the methodology that I employ in both areas of endeavor is similar. I think that this is perhaps a matter of temperament and personal disposition. Usually, I take a stepwise, scientific approach to developing a photographic project, and once it is delineated, I surrender to the encounter and trust that my research on the subject and the clear elaboration of my ideas make up the foundation guiding me through the process. In addition, my ability to ask pertinent questions in my professional work is a tool that has served me well. It has allowed me to acutely delve into the challenges of creating images that are true to my vision and that can elicit an emotional impact in the viewer.

R.C. - How do you define ‘subjectivity’ in photography?

A.L.S. - There is much debate in art theory about this matter and about what constitute works of art, so I will try to define a complex subject in a simple way. ‘Subjectivity’ might be described as an inherited human tendency to organize and interpret experiences in a particular way and to make meaning out of them. While the photographer may take and objective approach to the method he or she uses to create an image and the camera objectively records what she selects from a scene or arranges as a composition, the final art product is subjective. It is the artist’s personal rendition of the phenomena he has investigated. On the other hand, the emotional and aesthetic reactions by the viewer are also subjective because the viewer’s interpretation of the work is informed by her or his personal experiences and artistic sensibilities. What emerges out of this subjectivity is dialogue between artist and viewer.

R.C. - Your work interacts with the viewer in a very interesting way, because far from documenting or immortalizing a specific moment, you capture elements from everyday settings that could be considered ‘activators’ of memories, visions, scenes, etc., which do not exist physically, but can be interpreted according to the visual and emotional background of the viewers. Do you look for or ask for feedback on your photos?

A.L.S. - No, I do not ask for feedback from the viewer. With this body of work in particular, my intention was to create a lyrical poem presented in an abstract form, a kind of musical arrangement. My hope was to guide the viewer through a reflective experience that might elicit their recollections. Interestingly, a number of people who have seen the work responded to the images by recounting their own memories. For me this has been a confirming experience.

R.C. - What do you believe is the best path for a photographer?

A.L.S. - I am a self-taught photographer who strongly believes in the pursuit of excellence and who is particularly demanding both in the technical and creative aspects of my work. While it is not necessary to obtain a formal art education to produce excellent work, I believe that a photographer is responsible for learning well the craft of her or his chosen medium. I also believe that anyone interested in making art could benefit from specialized training. Since photography exists in a historical context and is part of an artistic tradition, I think it is important to study the history of the medium. It is equally important to have at least a general understanding of art history, for being exposed to other art forms, including music and literature, may help the photographer further their artistic sensibilities and locate their place in the artistic milieu of their epoch.

R.C. - How much of this work is connected to your knowledge of the history of art and photography?

A.L.S. - While my images are more classical in their rendition, I feel that they are linked to the modernist and postmodernist periods in art history, particularly to the abstract expressionist movement. Marcel Duchamp’s conceptual ideas about art were the source of many of my artistic explorations during the 1970s, His piece, Nude Descending a Staircase #2, changed my way of understanding and rendering portraiture. Of the abstract expressionist movement, Willem de Kooning, Mark Rothko and Robert Motherwell are among my favorite painters. Ignazio Jacometti, Marino Marini and Henry Moore influenced the way I approach photographing the human form. I have a particular predilection for the photographic style of Henri Cartier-Bresson, Robert Franks, Robert Rauschenberg, Aaron Siskind, Minor White and Edmund Teske. Among the contemporary photographers, I identify with the work of Arnold Newman, Saul Leiter, Mary Ellen Mark, Sally Mann, Abelardo Morell, María Martínez-Cañas, just to name a few. I have been significantly impacted by the work of Keith Carter, for I share an affinity with his lyrical and abstract approach to portraiture. Taking a workshop in the summer of 2013 from Mr. Carter was the catalyst to my decision to show my work and begin a dialogue with an audience.

R.C. - Is there a narrative in this body of work? Are the photos organized in a specific order?

A.L.S. - “Where Memories Reside” was composed as a lyrical poem that could also be read as a series of individual poems like one reads a haiku. So the order of the photographs does not matter. It was my intention to elucidate a palpable narrative, a story about the sea that incorporates the human presence in most of the images.

R.C. - In your works, objects have a connotation that goes beyond the merely symbolic. How do you determine the significance of a particular object and choose it as the protagonist of a photo?

A.L.S. - In essence, it was the poem that I wrote at the inception of the project that initially guided me in choosing many of the protagonists. At the risk of sounding esoteric, the protagonists also chose me. Immersing myself in the act of observing the light reflected on the subjects that I was drawn to revealed their beauty, textures, contours, shapes and forms. The best way to describe my encounters with the eloquence articulated by each personality, for I view each image as a portrait of an experience, is to quote part of my artist statement. I found myself entering a meditative state of mind, ‘a kind of moment-to-moment experience where the impulse toward particular elements in the external environment combined with the physical act of observing and making the images I experienced as remembering.’

R.C. - I know that from a young age you started your creative path, and your approach to photography dates from some time ago. To what extent is this body of work related to your previous pieces?

A.L.S. - Yes, “Where Memories Reside” is definitely related to my earlier work. As I previously stated, I was initially drawn to photography because it offered me an opportunity to study portraiture, which is the approach I took for rendering the images in the current work. In addition, my close-up presentation of the subject in each image and the non-sequential organization of the theme give an abstract quality to the work that is reminiscent of my early paintings and photographs.

R.C. - What projects are you working on currently?

A.L.S. - I am currently working on two projects. With one of them, I continue to explore memories as a metaphor for symbolically representing an important cultural, religious and sociopolitical event during a historical period in Western civilization. And the other marks the beginning of moving my work away from a classical approach in the direction of an experimental path.